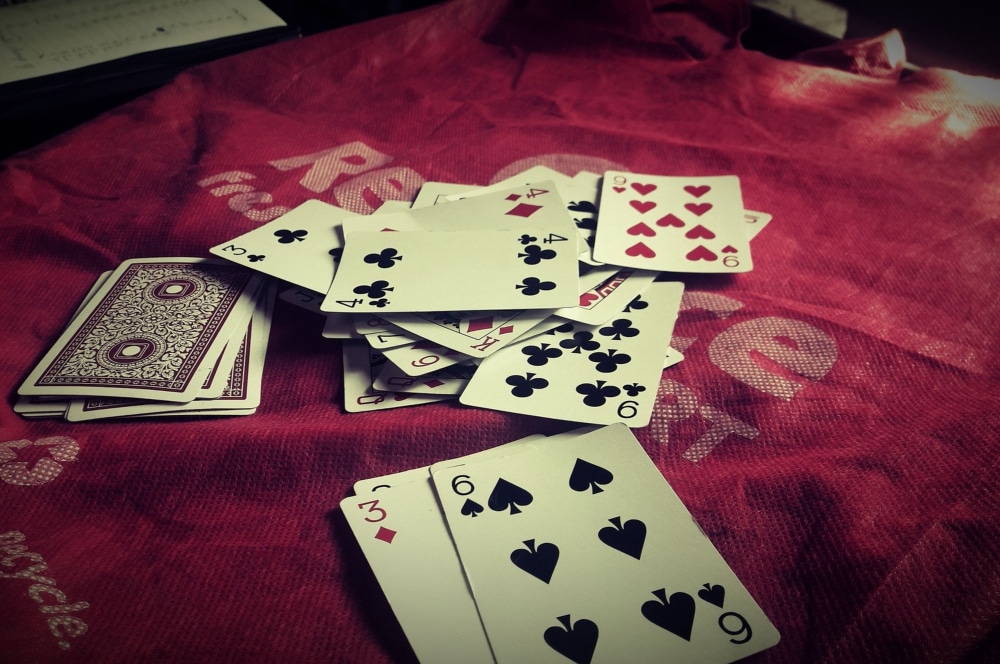 Home » Games » Everything You Need to Know About Euchre

The popular card game euchre is responsible for the invention of our much-beloved joker. While there’s some debate about how euchre arrived in the United States and where it originated from, most surmise that it developed in Cornwall and England’s West Country. The joker, in essence, is a glorified jack taken from the word “jucker” (which means “jack.”) Today, we’re digging into the history of euchre, as well as basic rules, tips, and strategy so you can enjoy–and win–at this fun card game!

While some believe that euchre was introduced by Pennsylvania German settlers, most believe that the game is derived from an eighteenth-century Alsatian card game closely related to Triomphe. The game was also popular in Devon, a neighboring county to Cornwall, so there’s also a theory that it was brought to the US by French or American prisoners of war in the 1800’s.

Whatever its origin, euchre is a fun, fast-acting game that revolves around tricks. Recent decades have seen a decline in its popularity, but more recently euchre card game popularity has revived. The goal of euchre is to win at least three tricks. A team is “euchred” if it has fixed the trump and failed to get three tricks. The team who has won all five tricks has taken the “march.”

Rules of the Game

How to play euchre is simple. It’s most often played with two teams of two people each. The deck used is a standard play card of 24, 28, or 32 cards. However, all the cards in the deck are not used. These are the cards included:

The dealer begins by dealing each player five cards. The dealer deals in two rounds, clockwise, beginning with three cards and then two cards or vice versa. The dealer’s remaining cards are placed near the center of the table, with the top card face up. This is known as the kitty.

If requested, the dealer may offer a “cut” to the player to the right. This is done by splitting the deck after shuffling, making it virtually impossible for the dealer to stack the deck (further shuffle is not allowed).

Scoring is relatively simple, once you understand the role of the jacks and how trump works. When the dealer has dealt, she will go around the table clockwise and offer the trump. Each player has the option to “pick it up” by indicating that the top card on the kitty will be trump or to “pass.” Colloquial versions require a knock on the table in exchange for a verbal affirmation.

This naming of the trump is the partners’ declaration that they plan to win most or all of the tricks in that round. If none of the players call trump, the dealer may call it by selecting the card that is face-up on the kitty and, choosing his or her worst card, place it face down on top of the kitty. Doing so effectively establishes the top face-up card’s suit as trump.

If neither the players nor the dealer declares trump, the dealer then flips over the top card of the kitty, and goes around the table again, starting with the player on the left. Each player now gets the opportunity to declare a suit as trump (other than the suit that was already discarded). If there is still no declaration of trump, the round is declared a misdeal, and the next person to the left becomes the dealer.

Once the trump has been declared, any member of this suit has a greater value than any other card from any other suit, except the left bower, which we’ll explain in a moment. While every suit devolves in order from Ace, to King, to Queen, to Jack, to 10, to 9, the trump suit now takes them all.

Here’s an example of ranking order, from highest to lowest, assuming that diamonds have been named the trump suit:

The jack scoring is actually where the jokers originated, as they were originally designed to be stand-ins for the right and left bowers.

In addition to the rules surrounding the trump suit and the jacks, the second most important rule to remember about euchre is that you must follow suit. If the first player has played a King of hearts, for example, all other players must also play hearts unless they do not have a heart card. Failing to do so is called reneging and is a serious infraction!

Euchre rules state that once every card has been played, the teams’ tricks are counted. If the partnership that called trump has won every trick, it is awarded two points. If it has won most tricks (three to four hands), it is awarded one point. If it wins less than three tricks, the partnership has been “euchred,” and the opposing teams win two points. The team with the most points at the end of the round wins.

There is a special circumstance in which a player with an exceptionally good hand can declare “go it alone” or “lone hand.” In this case, this player’s opposing partner places his or her cards down on the table and does not play for the rest of the round. If the caller wins all five tricks, her team wins four points. If she wins most of the tricks (three or four), one point is scored. If her team is euchred, the other team still only wins two points.

Strategies for Winning at Euchre

Euchre strategy can start simply as you learn the game and progress to greater levels of complexity, which is part of what’s made it such an endearing card game for so long! One of the best strategies for winning is to simply pay close attention to the trump cards.

Beginning players often stumble significantly over this issue alone. With all constantly changing right and left bowers and trump suits, just being able to calmly think through your options in a fast-paced game will put you ahead of the curve.

Another important tip is to pay close attention to what cards have been played to help you determine what cards are still left. You want to keep a close eye on the trump card the dealer grabbed from the kitty; you will also want to keep your eyes peeled for any of the bowers. Knowing what other players have still in their hand can help you play more strategically.

If, for example, you have three trump cards, you know that there are only seven other trump cards, and those must be divided among the other three players and the kitty. When you lead with a trump, the three other trumps played by players will nearly clear the deck of trumps–or at least let you know who doesn’t have one.

Finally, there’s a school of thought that says you should lead with a non-trump ace if possible. You can deduct that if you don’t have any other of that suit in your hand, the other players are likely to have them all, and you’ll be able to take the trick. Also, you’ll get rid of a suit in your hand, which means that you’ll be able to play a trump if that suit comes up again. The same reasoning compels you to not lead with an ace if you have several cards of the same suit, as others will be unlikely to have cards in that suit and will be able to trump you.

Euchre is a fantastic game with lots of great action. Now that you know the rules and some basic strategy, grab three friends and start playing!