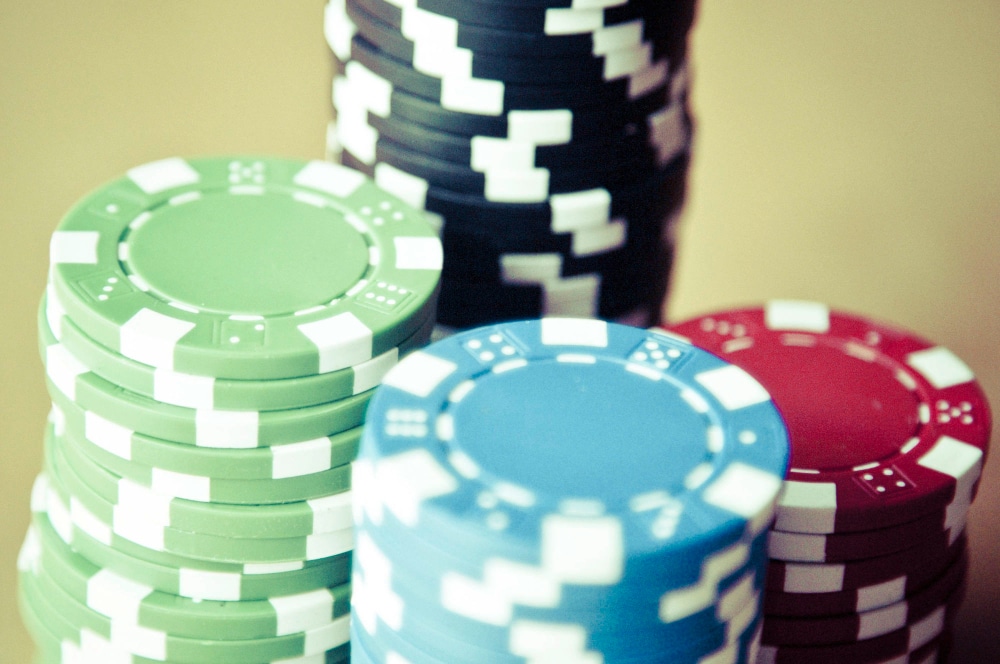 Home » Games » How to Win at Poker (the Ultimate Guide)

Most card games don’t stand the test of time–but not poker. This two-hundred-year-old card game employs psychology, probability, and plain old luck to create a game that’s heart-stoppingly addictive. Want to learn all you need to crush your next game? Let’s get started!

How It All Began

When we think of poker now, we think of Las Vegas and professionals with a lot of money on the table. The game’s origins are much more humble. Developing in the 1500’s as a German game of bluff called “Pochen,” it was eventually adopted by the French (who called it “Poque”) and then delivered to the riverboats on the Mississippi by way of New Orleans.

During the Civil War era, the game adapted again and came to be known as the poker game we play today. Today, poker is played beneath the haze of cigar smoke in man caves, under the glare of casino lights, and everywhere in between, for matchsticks, pennies, or thousands of dollars. It’s been featured in countless movies and even plays pivotal roles in films like Casino Royale and Ocean’s 11. It’s a game that’s known for being easy to learn, but taking a lifetime to master. Let’s see if we can help you speed up the process!

Poker refers loosely to a group of card games that involves similar methods of betting, skill, and strategy. There are a number of different kinds of poker games (we’ll go into more detail about that later), but most games use the same scoring method and card values based around a standard 52-card pack.

Hands are scored based on their likelihood of occurring; the less likely, the higher the score. There are a few versions that do not use five cards, but most do. Poker is somewhat unusual in that the suits have no values on their own. Here are the scoring combinations:

Five of a Kind

The highest hand possible, a five of a kind can only happen when at least one card has been designated wild. This is happening with increasing frequency and can be the jokers, the four deuces, or the two one-eyed jacks.

Here’s an example hand: four queens and a wild or three 9s and two wilds.

Four of a Kind

This hand ranks just below a straight flush. The fifth, unmatched card doesn’t matter, as long as you’ve got four of the same card.

Two cards of one rank and three cards of a different rank are considered a full house. Examples are two 5’s and three aces or two queens and three 6’s.

A flush is five cards from the same suit that are not in sequence.

Here’s an example hand: five, three, seven, queen, and jack of diamonds or a two, jack, ten, five, and six of hearts.

If you have a straight, you have five cards in a sequence but not a suit. You can consider this a sort of partner to the flush. You might have a nine, eight, seven, six, and five of three different suits.

Three of a Kind

Three 7’s, a jack, and a king is an example of a three of a kind. It doesn’t matter the suit; what’s important is that there are three cards of the same rank and two other cards of different ranks.

This is one of the most likely hands (which means it’s outranked by most of the other hands). It contains two sets of the same rank, plus a fifth unmatched card. You might, for example, have two 3’s and two 10’s, or you might have two queens and two 7’s.

This hand is straightforward; out of five cards, you’ll have two with the same rank, such as two 10’s or two kings.

If none of your cards pair and none of them are of the same suit or in a sequence, you have a no pair. The only way to win with a no pair is against another no pair, in which case the player with the highest rank takes the hand.

Ties are dealt with by splitting the pot among the tied players, though if two players have the same pair, then the next high ranked card wins. Similarly, two hands with the same pairs would be split by the fifth card.

Now the fun begins! How to play poker is fairly straightforward, but it quickly becomes complicated because you have to take human behavior into account. Poker, more than anything, is about knowing when to play. Here’s a tutorial on positioning, betting, and knowing when to be aggressive and when to fold.

Typically, most poker games today begin with a round of betting. Usually, it is only one or two players making a forced bet (usually called the “blind” or “ante”). Betting proceeds clockwise around the table as each person decides to call (match) the previous bets, raise (increase the wager), or fold (drop out of the hand) based on what she believes her hand is worth.

The rounds end when all players have bet the maximum number of times or folded. If all but one player folds, the last remaining player wins the pot. If all bets have been maxed there is a showdown in which all hands are revealed, and the winner takes the pot.

Except for the initial forced bet (called the “blind”), bets are voluntarily made. In fact, some experts suggest that good poker strategy means that out of every one hundred hands of poker, you’ll fold seventy times. The flush of the game and the thrill of the gamble is often too much for beginning players, causing them to stake high wagers on cards that aren’t worth much. This is one of the most important strategies for new players: be patient!

Poker is grouped into approximately four different types of variations. There are innumerable variations inside each category, but we’ll stick with the most popular here today.

Stud poker is one of the oldest poker families. In these games, cards are deal in a prearranged combination of face-up and face-down rounds. Typically, there is betting between each round. Another common poker family is draw poker. What’s notable about this family is that players are dealt a complete hand and can discard and pick up new cards to improve their hands.

Community or flop poker is also popular. Texas hold ‘em is one of the most common examples of this type of game. In it, players are dealt two cards face-down, and can utilize the five community cards laid down by the dealer, with rounds of betting before the fourth card (the bend) and the fifth card (the river).

Probably the oldest family of poker is straight poker. Each player receives a complete hand before betting, and then bet in one round, though they can raise and then raise again.

You could study poker rules and the infamous poker face for a lifetime, but we’re going to give you some time-tested tips to help you see immediate progress in your next game.

One of our first tips is to think of poker as an investment game, not as a gambling game. You’ll only play your hand when you have reason to believe it will perform well. You’re expecting a return, and will wait–despite how exciting the game becomes–until you’ve got a hand that can go the distance.

Another strategy is to pay close attention to your position. For example, if you’re the first to bet, you’re in a weak position since you have no way to tell yet if your opponents have strong or weak hands. Better to check until you know something better, or to not risk much with this round. If you’re the last to bet, however, you’re in a great place and can make an informed decision. This kind of strategy keeps you in the green!

Another important strategy is to pay attention to your “tells.” A tell is a movement, gesture, or expression that gives away your opinion on your cards. For example, if your eyebrows go up when you get a good hand, you’re telling your opponents they should fold, and you won’t win much. One of our best suggestions for minimizing your tells is to keep a strict routine. Do the same thing during every part of the round, and you’ll help to avoid those small signals that give away your position.

Poker is challenging yet fun. Now that you know the basics and have some terrific strategy under your belt get out there and win some games!