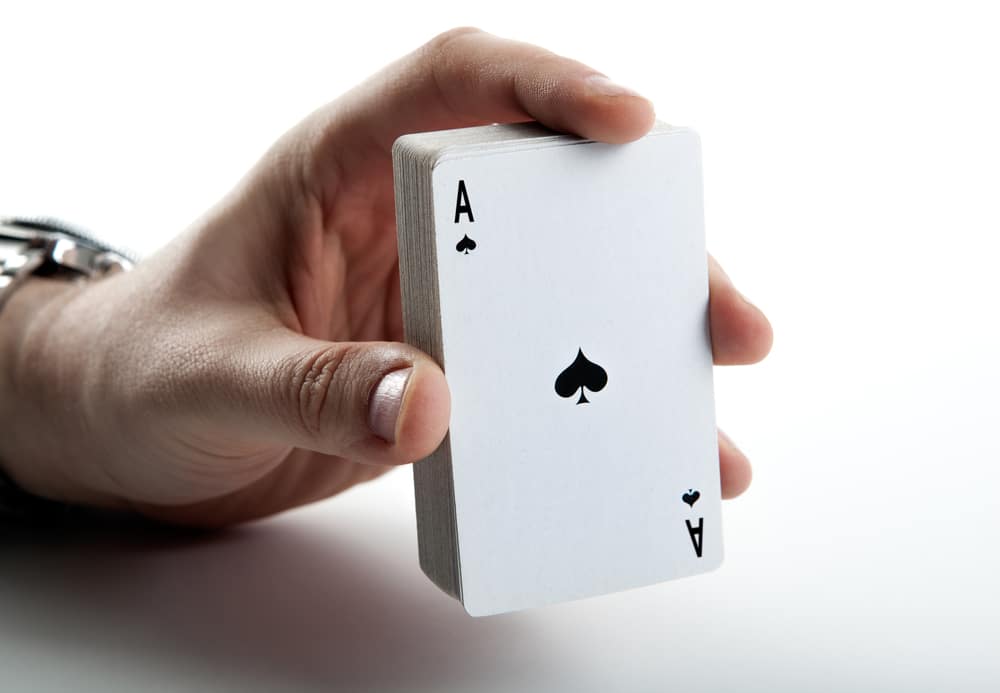 Home » Games » Spit Card Game: The Fastest Card Game You Can Play with a Friend

What better way to pass the time than a game of cards?

Sure, you can play with your mobile phone or watch the TV for entertainment but you can’t go wrong with card games to keep things exciting. This is especially true if you have an equally-bored companion with you.

When it comes to games that can be played by two persons, the spit card game is a well-known classic.

Today, we will teach you how to play the spit card game as well as some tips to get the most out of your experience.

What is the Spit Card Game?

Also known as Speed or Slam, Spit is a playing card game where quick reactions are a must versus the usual card games where players must take turns in a sedate fashion.

In Spit, each player strives to play as quickly as possible without having to wait for their opponents. The main object of the game is to get rid of all the cards in the quickest way possible.

The card game Spit is played by two players.

How to Play Spit?

Spit is played by two players so grab a buddy or a loved one. The rank of the cards starts from the highest which is the Ace and the lowest is 2.

Spit is a very fast paced game of cards so it’s highly recommended that you don’t use your favorite or best deck as it’s known to cause damage to the cards.

Shuffle the cards properly and deal the deck evenly to both players so each will have 26 cards.

Each of the players deals out 5 piles of cards in front and facing down. The first pile will have one card, the second will have two, the third will have three and so on until there’s a fifth pile with five cards. Turn face up the top card of each file and these will be known as your “stock piles.”

If you did this right, you and the other player should have 11 cards on hand. These are referred to as “spit cards” and players should now look at them.

Once all players are set, they take turns saying the word “spit” while turning each of their top spit card face up. The top spit card is placed in the center of the play area in between the two stock pile rows. The two cards that are placed by the two players are called the “split piles.”

The pace of the game is fast because it proceeds as fast as the participants can move. There are, however, two restrictions: players are only allowed to use one hand, and only one card can be moved at a time.

The goal is to be the first one to play all 15 stock pile cards on to the spit files.

To play the card onto the spit file, it must be the next card in sequence, whether it’s higher or lower. Colors and suits don’t matter here.

Once a player moves a card from his stock pile onto a spit file, he can proceed to turn the next card to in the stock pile to face up.

The card is officially played as soon as the card touches the spit file, so there are no re-doing things once the card is played. In the scenario that both players are playing on the same spit file at the same time, the first player who touches the pile is the one who gets to place his card.

If the game reaches a point where there are no legal plays possible from the stock pile, both the players will say “spit” simultaneously and each turn to face up his top spit card, and placing it on one of the spit piles.

The End of the Round

There are two conditions that will end the round: A player gets rid of the cards from the stock pile by playing them all, or neither player has no legal moves left but still have cards in the stock.

When either of these happens, both players should slap one of the smaller spit files.

When the players slap different piles, they take the piles that they have slapped. If both players slap the same pile, the fastest one to slap the file gets it.

If a player with no spit cards left and is able to clear his stock piles first, he takes the win.

Speed is really the name of the Spit card game.

It’s really a fun game that you can play with a buddy or loved one.

CardGameInfo is a great website for general information and tips for many different card games.