Cribbage Game: An Engaging and Fast-Phased Card Game for Two If you're looking for a fast-paced card game for two players, then Cribbage is the game for you. A Cribbage game requires quick thinking, foresight, and basic arithmetic.

Quick Navigation
What is Cribbage?
A Cribbage Game Board
The Deck
How to Play
Choosing The Dealer
The Crib
Game Setup for:
Before the Play
The Play
Points During Play
Counting The Hands (After The Play Ends)
Cribbage Game – Conclusion

A regular Cribbage game is a two-handed or player game, though it is expandable for play with three players or two teams of two. The objective of cribbage is to score 121 points first. Players do this in multiple rounds closed out by scoring hands.

A Cribbage Game Board

Unlike many card games, a board is used to keep score because it is faster to score with one. In a bind, it is possible to play without a board.

The board has three different color “tracks” that go from 0 to 120, with the finish being the 121st hole. There are 3 pegs of each color used for scoring.

A standard 52 card deck is used to play. Cards both have cardinality (the sequence in which players can lay them down) and value (the contribution a card makes toward the total value in play during a round). When looking at laying cards down in sequences the following order applies: King, Queen, Jack, 10 through 2, Ace (low). When adding card values within the game, use the values on the cards, except “face cards” (King, Queen, and Jack) are worth 10 points. 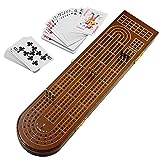 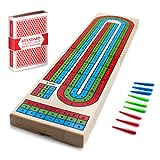 In a Cribbage game, one player is the dealer, which is an important designation as it holds an advantage within the round. The dealer is picked before the first hand and changes every time a new round is started. Who deals hands for the first game is determined after each player cuts the same deck and draws a card. Whoever draws the lowest card is the dealer for the first game.

The "crib" consists of four cards and is put together during the game set-up. These cards are selected by the players out of their hand and placed in a pile belonging to the dealer. This pile is left untouched until the end of the hand. At the end of the hand, the dealer will count these cards as an individual hand and include the extra points in their own score.

During the play, cards played face-up are placed in front of the player playing them. They will return to the player's hand when the hands need to be counted to finish the round.

Each time a player puts a card down it is an opportunity to earn points. See the score chart provided after (10.).

Counting The Hands (After The Play Ends)

When counting hands, the cut card is included in everyone’s hand. After scoring hands, the game is set up for the next round and continues until someone reaches 121 points.

A Cribbage game is fast and fun, best played with two people. The play within a round, as well as the point system, can take a little bit of getting used to at first. Once players are familiar with scoring, the rounds will proceed smoothly, and individuals will be able to build their own strategies. For those who might get bored with a game like poker, but want something that can be challenging with the right opponent, try a cribbage game.