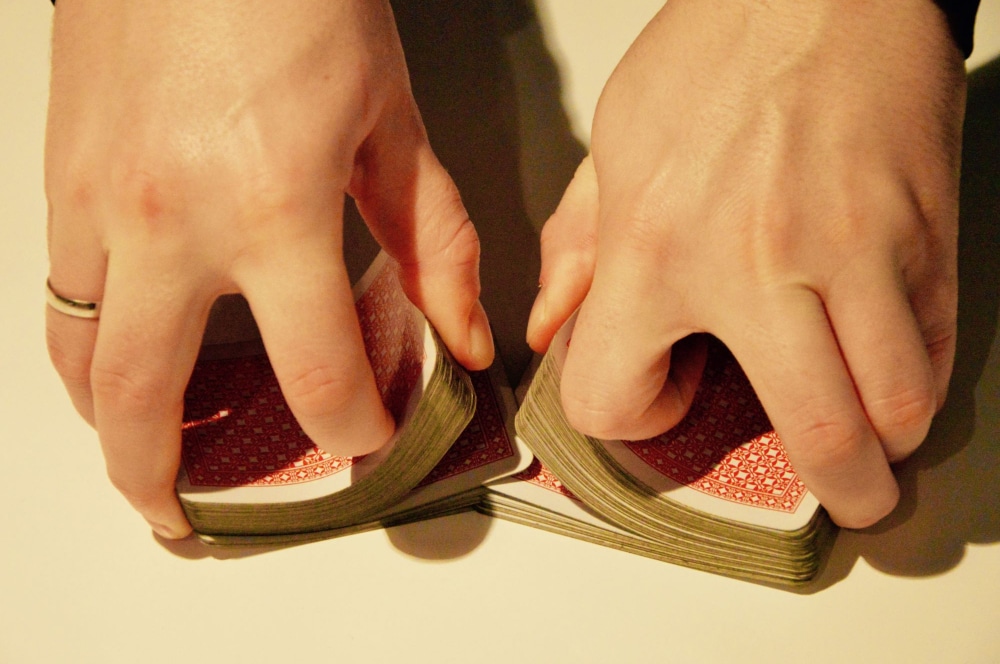 Usually, variations of traditional card games are created by companies that sell them commercially. However, there are games created for the commercial market by professional or amateur game creators, such as Phase 10. Here are the rules and how to play the Phase 10 card game.

The commercial card game Phase 10 was created by Kenneth Johnson and was based on a game called Contract Rummy he and his brother played as children. However, it wasn’t until he was laid off from his job as an auto worker in the early 1980s that he took time to create the game.

The company Fundex Games was able to get the rights to distribute the game in 1987. The negotiations took place over a cold glass of milk and a “Grand Slam” breakfast. The department store Kmart sold Phase 10 for almost 30 years.

The object of Phase 10 is for the players to complete all 10 phases of the game. The game is challenging, and each phase increases in difficulty.

As you complete each phase, you can go to the next one, but if you get stuck on a phase, you must remain on it until you can solve it. The winner is the first one to solve all 10 phases, but if there is a tie, the player with the lowest score wins.

A dealer is chosen amongst the players and then shuffles the deck. They distribute the cards to each player, one at a time face down. The players hold their cards in their hands so the others cannot see them.

The remaining cards are put face down in the middle of the table, called the draw pile. The dealer takes the first card from the draw pile and places it face-up next to it, which then becomes the discard pile.

Play begins when the player to the left of the dealer takes a card from either the discard or draw pile and puts it in their hand. They then place a card from their hand on top of the discard pile to end their turn.

What are the Phases?

Players can only make one phase during their turn.

Runs: If you need a run, then you need four or more cards in numbered order. For instance, a run would consist of a two, three, four, and five. They can be any combination of colors.

All of One Color: If you need cards of all one color, you can use red cards, green cards, or yellow, etc. The cards come in green, red, blue, and yellow. The cards do not need to be sequential.

More than one wild card can be used to complete a phase, but one of the cards in the phase needs to be natural. Players cannot replace wild cards with natural cards once they’ve been played. If the dealer turns over a wild card, the first player can pick it up and put it in their hand to complete a phase.

Only one skip per player can be used per round. If the dealer turns over a skip card, the first player is skipped.

How to Play Phase 10 Card Game

When the dealer finishes giving the players their cards, the first player can pick up the card on the discard pile, unless it is a skip card. Then, they can try to complete the first phase, or any phase they are on in subsequent turns.

If they complete the first phase, their turn is over, and the player to their left takes their turn. The players take their turns in clockwise order, always the one to the left.

When a phase is completed, it must be laid down face-up on the table. However, the phase should be complete before laying it down.

Players can lay down more than the minimum number of cards for sets and runs if the additional cards can be directly added to the phase. Once a player completes a phase and lays down their cards, they need to discard one.

Once you’ve made a phase, you can try hitting to get rid of leftover cards. A hit consists of putting cards from your hand on a phase that’s already on the board. The cards must fit into the phase before you put it down. For instance, if you have a set consisting of three fours for phase two, then you can add another four to the set.

Wild cards can be used as color or numerical cards to add to cards of all the same color, sets, or runs. Before you can hit, you must lay your complete phase down, and once you do, you can hit on your phases or another player’s.

Players who have leftover cards total their scores. The fewer cards you have left, the better. The next dealer than shuffles the cards and deals them to begin the next hand.

Each player should keep a running tally as each hand concludes. The winner of a hand will get zero points. The leftover cards scores are:

Only the cards left in a player’s hand are scored, not the ones they’ve already laid down.

One of the variations of the Phase 10 card game is the masters’ edition. It is played much like the original version, except for the addition of two rules:

1) During their turn, a player can choose which phase to complete after viewing their hand. This change should help speed up the game and eliminate runaway leaders.

2) Players can also save one card per hand, instead of needing to discard one. So, they can bank cards they may need for later phases or bank wild and skip cards. This rule is another attempt to speed up the game.

In addition to the rules, there are four sets of phase cards to help remind players which phase they have chosen. The masters’ edition of the game is limited to four players, but the original game can have up to six players.

If you and your friends want to learn a fun, challenging new card game, buy a deck and try Phase 10.