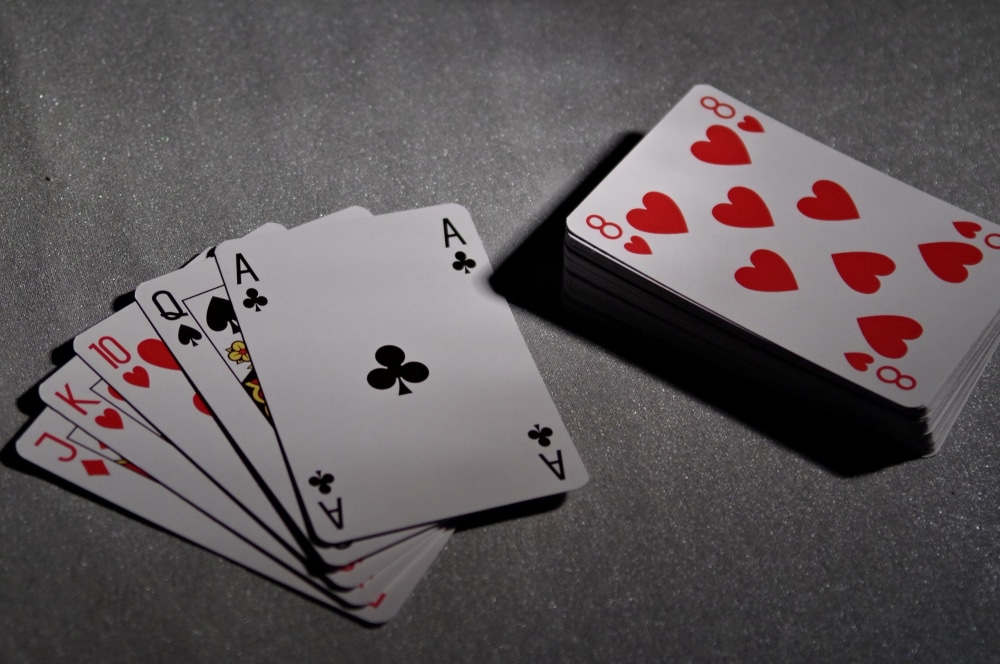 There are many versions of solitaire with which people can learn to entertain themselves. While almost everyone knows how to play traditional solitaire, other versions like FreeCell, Pyramids, or Golf are not as well-known. By learning the rules of it and how to play the Golf card game you can spend hours playing challenging yourself with the game.

History of Golf the Card Game

The Golf solitaire game only requires a 52-card deck of playing cards. The objects of the game are to remove all the cards from the tableau to the foundation and achieve the lowest score possible.

After shuffling the deck, the player lays out the cards by dealing seven cards face-up in a row. Then, four more rows are dealt beneath the first one with the cards overlapping.

The card layout should consist of five rows of seven cards dealt for a total of 35 cards. The cards are dealt face up, so all the cards of the tableau are visible.

For instance, if there is a five on the foundation pile and a six is showing, then the six can be played on the five. A four could be played on it as well. The suits and colors of the cards are irrelevant in this game.

Kings are stoppers because they cannot connect with a queen or an ace. The foundation cannot be built from ace to king either. So, if a king is showing on the foundation pile, you should draw the next card if there isn’t an exposed queen as the ace doesn’t play on the king.

As each turn ends due to no connecting cards, draw from the stock cards until all 17 have been turned up. Once they have, then the game is over.

Although one of the objectives of the game is to achieve the lowest possible score, you don’t need to keep a running tally during the game. The scoring is simple because it is equal to how many tableau cards are left over.

A complete game of Golf solitaire is nine holes, which are nine deals. So, when the first tableau is clear, or you have exhausted the stock cards, you shuffle and deal the cards again. At the end of the second hole, you count the score.

You will want to keep track of the score at the end of every hole because if you do manage to clear the tableau on some holes, you can deduct a point from the total score for every stock card that is left. So, if you have played three holes and the total score is 15, but there were five stock cards left on the last hole, you can subtract five from 15 for a score of 10.

The par for every hole is four for a total of 36 points. If you manage to score 36 or below, then you’re at or below par.

How to Play Golf Card Game

The Golf card game is an easy game to play, but there is some strategy involved. When the cards are dealt, examine the tableau to play the best card on the foundation pile. For instance, if there are two cards on the bottom row that will play with the face-up foundation card, then pick the one that will free the next card in sequence.

Otherwise, playing the game is done as described above. Each card available to play on the tableau, which are cards that are uncovered, should be played with the foundation card if it is in sequence. Each game, or hole, is over when there are no more plays because every foundation card was turned over or every card was removed from the tableau.

After scoring the hole, you can play eight more holes for a complete game.

Because of their limited play, players should be careful when there are exposed twos and queens. Ideally, when a queen is removed, a king should be as well if there is one exposed. The same goes for aces and twos, and if you remove a two, then an ace should be removed if possible.

Keeping track of the twos and queens can increase your chances of winning the hole and getting a low score. There are other ways of increasing your winning percentage as well.

If two cards of the same rank are exposed, and there is a play for them on the foundation pile, you should check to see if one of them has a card under it. Always play a card with others beneath it instead of a card that is the last one in a column.

Also, closely examine the cards that will be exposed when given a choice of playing two cards of the same rank. Look to see if:

1) Will the next exposed card be an ace or king? If so, it could be worth exposing if the foundation card is a two or queen.

2) Will the next exposed card help create a sequence as other cards are exposed? If it does, then it could be worth exposing it to create a long sequence.

3) Try to plan sequences by carefully examining the cards that will be exposed if you make certain plays. The first sequence you make may not be the best one if another sequence can help expose more cards. So, carefully look at the cards on the tableau to find the best sequence to play.

If you follow these strategies, you could increase your winning percentage and get the lowest scores possible for each hole of golf.

Each player has a deck of playing cards and everyone deals and plays their cards at the same time. A complete game of nine holes is played, and the person who gets the lowest score wins the tournament.

Other versions of Golf Solitaire include:

The main differences in the variations are the way the cards are dealt. For instance, in Black Hole, an ace of spades, or the black hole, is placed in the middle of the tableau. The tableau consists of 17 three-card fans, face-up.

The layout for Golf Rush is the same as classic solitaire with a row of seven cards, dealt face-up, with the first column having one card, the second two cards, and so on until the last column has seven cards, all of which are face-up.

King’s Way is played with two decks and with a tableau containing eight rows. The first row is dealt face up, but the next one face down. Then, four more rows of cards are dealt face up. The top foundation card is turned up to begin play.

The only difference in Putt Putt, or Hole in One, and Golf is that the cards can be played in sequence from ace to king if necessary. Otherwise, the play is the same.

If you want to play a simple, yet strategic solitaire game, then the Golf card game may be right up your alley…or fairway.