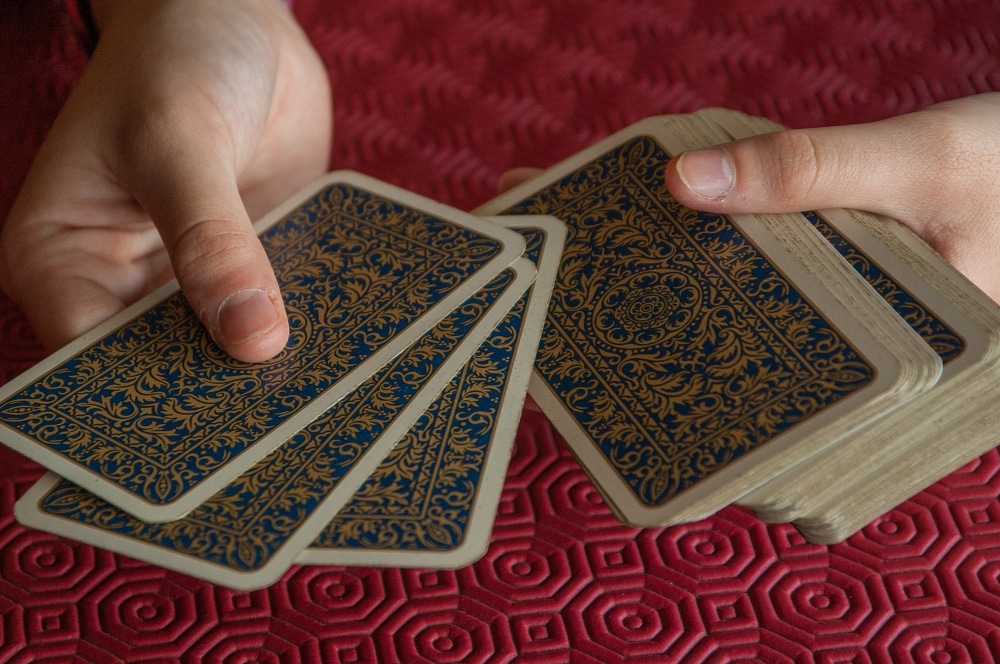 Home » Games » How to Become a Spider Card Game Expert

There are hundreds of different versions of solitaire, and the spider card game is among the most popular.  Also referred to as “Patience” in the UK, solitaire is as fun as it is addictive.  The best part?  You only need one person to play.

Here we’ll give you all of the information you need to set up, play, and win at the spider solitaire card game.  We’ll include a brief history of how it developed, a how-to guide to teach you how to play, tips and tricks to win, and some notes about variations you can try once you’ve mastered the original.

Card games have been popular for centuries, and Solitaire can be traced back beyond the 1800’s.  Historians believe that it was a pastime of Napoleon during his exiled years, but the game truly came into popularity around 1870.

At that time, Lady Adelaide Cadogan published her book, the Illustrated Games of Patience that included 24 games and Solitaire was among them.  This was the springboard for the card game, and today there are an estimated 250 different versions of Solitaire-based card games.

Spider Solitaire hasn’t been around as long as the original, only invented about 1949.  Named because of the eight discard piles that correspond to the eight legs of a spider, this favorite version is also similar to the Scorpion option.

The first commercial release of the game came in 1987 when Brad Fregger developed a program for the Spectrum Holobyte computer.  They installed it on both PC and Macintosh models, and it included eight different versions of Solitaire including spider.

Since then, several different ways to play Spider have emerged, which we will outline below.  Some of these versions make it easier to win the game, which can also make it more fun to play.

Like all games, there are some basic rules that you’ll need to follow to play.   To get started, remember:

Now that you know the rules, you’re ready to get started.  Here we’ll outline how to deal, play, and win at Spider.

You’ll need two standard 52-card packs to play Spider Solitaire.  You won’t use the Jokers when you deal the cards.

The object of the game is to assemble 13 cards of the same suit in an ascending sequence from Ace through King on top of a pile.  Any time you group the full suit of 13 cards together, you’ll lift it off and discard those cards from the game.  To win, you need to assemble and remove all eight suits.

First shuffle both decks together and then deal ten piles of five cards each across a horizontal line in front of you.  The first four cards of each stack are placed face down, and the top card is face up.  This makes up the starting point of your tableau.

While it’s not possible to win every game of Spider Solitaire, there are some best practices that will give you better odds.  Try to incorporate these strategies into your moves to give you the best chance of beating the game.

1. Build Your Sequences by Following Suit Whenever Possible

If you have a choice of building in a suit, also sometimes called “natural builds,” take it.  Not only does it make it easier to keep your stacks suited as the game progresses, but natural builds may also be moved as a unit which can allow you to expose hidden face-down cards or empty tableau piles.

2.  Get Face-Down Cards Flipped Over as Soon as Possible

You need to see what you’re working with, and uncovering face-down cards is the best way to do that.  They might unlock new possible moves, and if your luck pans out, give you an opportunity to make an empty tableau pile.

3.  Use Empty Tableau Piles to Your Advantage

Once you have those empty piles available, use them strategically.  It’s smart to empty at least one as early as possible so that you have a place for temporary storage, and to get cards uncovered along the way.

4.  Start with Higher-Ranked Cards when Possible

If you have to build an unsuited stack, start with the highest ranked cards first.  You can’t be able to move your out-of-suit build to another tableau pile, so you’re essentially using it as a temporary storage option for cards from other piles in your tableau.  If you start low, you’ll run out of room quickly so be sure to use high cards for the maximum advantage.

Once you’ve mastered the original version of Spider, you can try on one of these variations for size.  Some eliminate suits, making the game easier to beat, while others incorporate more decks or modifications to the rules to make it more challenging.  Here are the most common alternative ways to play.

Just like the name suggests, this version uses only two of four possible suits in the deck.  Traditionally, you’ll deal all your Spades and Hearts when you play and follow all the same rules as traditional Spider.

In this version, you’ll deal only the Spades in your decks and play with just one suit.  Again, the rules all stay the same, but starting with all your cards suited means it’s much easier to beat than traditional Spider.

If you’re looking for a game that is even more challenging, try this version.  Here, you’ll use four decks instead of the standard two, and play by all the same rules.

One of the trickiest parts about Spider is the rule that requires all of the open spaces to be filled before you can re-deal.  In this version, that rule is eliminated.

This option plays with just one pack of cards and uses the Klondike layout but still follows the Spider rules.

While this one could have a category of its own, it’s so similar to Spiderette it’s worth mentioning here.  Invented by Geoffrey Mott-Smith, this Solitaire option is played the same way as Spiderette with one exception.  At the start, you deal twenty-one cards into seven separate columns of three and only the top card on each stack is face-up.

1 thought on “How to Become a Spider Card Game Expert”