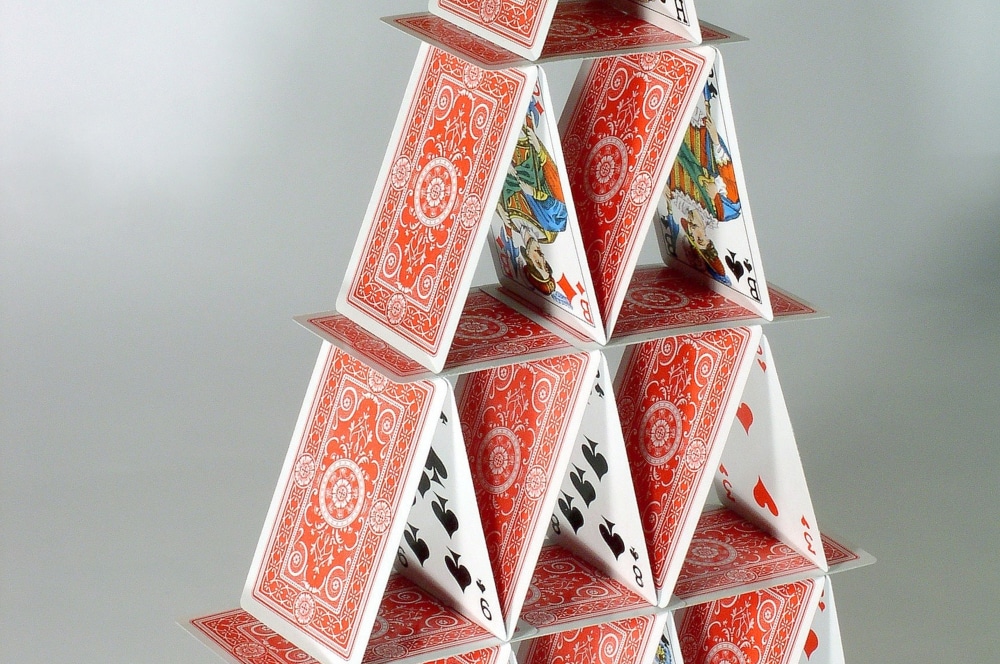 Many people like playing solitaire on their computers when they are bored or taking a break at work. One of the many variations of the solitaire game is called Pyramid Solitaire. By learning the rules and how to play it, you can increase your chances of winning at this Pyramid card game.

Like the overall history of the original solitaire, or patience game, not much is known about the origins of Pyramid solitaire. Most scholars believe that solitaire was created in the Baltic regions of Europe and was based on tarot card readings.

Pyramid solitaire has some elements found in solitaire games, which include:

Many of the variations of solitaire are believed to have originated in France as any English books regarding patience games, or solitaire, refer to French literature. The earliest mention of these games in English books was printed around 1870 and credited to Lady Adelaide Cadogan in her book, Illustrated Games of Patience.

When you’re playing the Pyramid version of solitaire, the object of the game is to remove all the cards from the pyramid by placing them in a discard pile. All you need to play the game is a regular deck of 52 playing cards.

Before you deal the cards, shuffle them several times to mix them up. Then, deal them in the shape of a pyramid, with the first row consisting of one card, the next row two cards, and so on until the final row consists of seven cards. The rows should overlap each other, and there will be 28 cards in the pyramid when you’re done dealing them.

The last row, consisting of seven cards, will need to be played first to help reveal the other cards in the pyramid. Any cards with overlapping ones beneath it are considered blocked, so they cannot be played until at least one of the blocking cards is removed.

To start play, turn over the first card in the draw pile, also known as the stock pile. Only pairs of cards that add up to 13 can be removed and put in the discard pile. For the cards to add up to 13, each card is assigned a numerical value. The numbered cards, 2 through 10, retain their face value, but face cards values are:

So, if you turn over a king, or one is on the bottom row of the pyramid, it can be put directly into the discard pile since its value is 13. As you remove cards that add up to 13, the exposed cards are then eligible for play. However, both of its blocking cards need to be removed to expose it.

If there are no available plays as you turn cards over, you can continue to turn them over one at a time to look for playable cards. If all plays from the stock pile are exhausted, the game is over. However, if you discard all the cards in the pyramid, then you win the game.

How to Play Pyramid Card Game

When you learn the rules of the pyramid card game, then you will know how to play it. As you draw cards from the stock pile, look for another exposed card that equals to 13 when you add them together. You can also check to see if exposed cards on the pyramid add up to 13 and discard them if they do.

In addition, if a blocked card has had one card removed and the second card blocking it adds up to 13, then those cards can be put in the discard pile. Along with the game being called pyramid, it is also known as Solitaire 13 since the cards need to add up to 13 before discarding them.

Although you can play the game with a deck of cards, it is also available online or, if you have a Windows operating system, it may be included on your computer. The online version may differ slightly as some versions only have six cards on the bottom row of the pyramid.

Also, they may include a waste pile, which is made up of cards that could not be played when turned over. However, they are still eligible for play if they are the top card in the waste pile. So, if you expose an eight and the top card of the waste pile is a five, you can play the two cards together since they add up to 13, and discard them.

The online versions may also include a reserve pile, which consists of six cards that are eligible for play at any time. The computer will deal the reserve cards immediately after the pyramid is dealt.

As with most solitaire games, there are many variations of Pyramid that can be played online or with cards. Most variations of the game involve dealing the cards out in different patterns to play them. However, the majority of the variations were created for online play, which makes it difficult to find the rules.

One version, called Relaxed Pyramid, is played like the original game, but the object is to remove the cards from the pyramid to a foundation pile. The game can be won even if you have cards left over in the stock pile.

Giza is another variation on Pyramid solitaire, but this pyramid card game setup is different in that the cards are dealt into three pyramids. There isn’t a stock pile to draw from, and there won’t be a waste pile either. However, cards must total 13 before removing them from the pyramids to the discard pile.

Another version of Giza involves dealing one pyramid and using the rest of the cards by dealing them face up into eight columns of three cards each. Since you won’t have a draw pile, the cards in the eight columns will be paired with cards from the pyramid to add up to 13 and removed.

Learning how to play pyramid solitaire game is basically the same for all versions. Two exposed cards must total 13 before removing them to the discard pile.

If you are looking for better ways to win at Pyramid Solitaire, try these tips.

Tip One: Kings are First to Go

Always remove kings to the discard pile as they equal 13 and will only be blocking other cards.

When the pyramid is dealt, check it to see if the game is winnable. If cards equaling to 13 are in different rows, then sometimes winning will be impossible. For instance, if all the tens are on the bottom rows and the all the threes are in the top rows, then the classic game cannot be won.

However, if you are playing one of the variations with a temporary storage area, like a cell, then you may be able to store a card to expose others to help you win the game. If any of the variations are not winnable, then start over because playing the game will be futile.

Each move should be planned to help expose cards, so they are eligible for play. While the classic version is more about luck, most of the modern Pyramid games have a logical sequence to them so that you can plan your moves in advance.

If you’re playing the classic game that involves removing cards from the pyramid, then dealing one card at a time from the stock pile is fine. However, if you’re playing a version requiring all the cards to be removed, split their removal with a three-card deal and play the pyramid simultaneously to avoid blocking conditions.

Many people like playing the Pyramid Solitaire card game because it involves more than turning over cards. It is challenging because you must add two cards together to total 13 before removing them from the pyramid. Helping your child to play it could a fun way for them to learn math while playing a game.