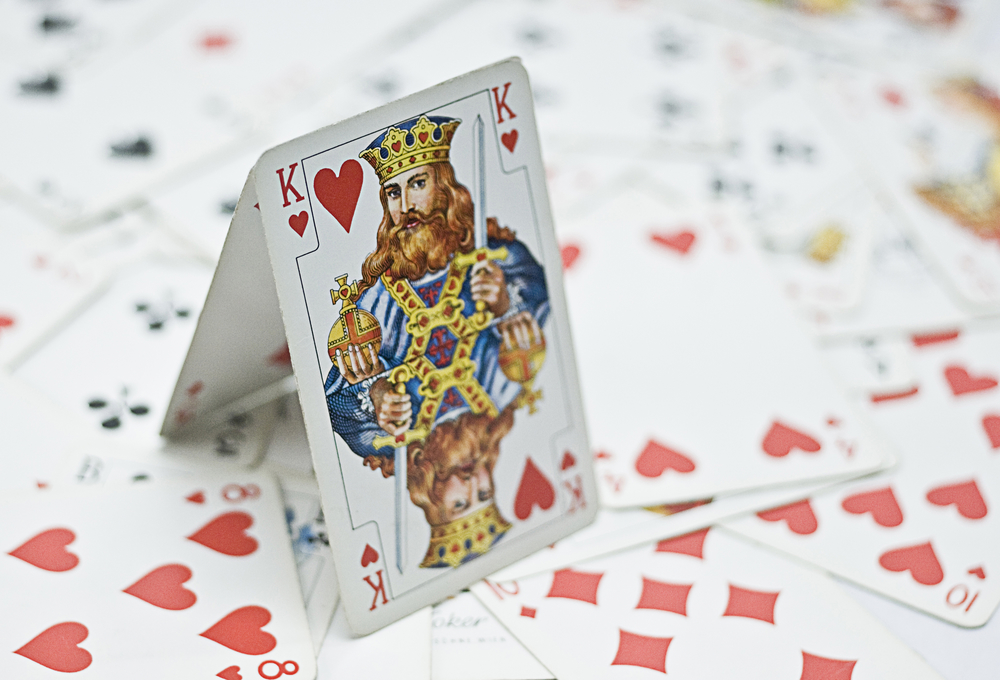 We all have played solitaire at one point or the other thanks to computers. This mesmerizing single-player card game, hence the name,  became popular with the world as a computer game with Microsoft. However, even before computers were invented, people were known to while away a beautiful afternoon engrossed in this fantastic game.

There are more than 100 distinct versions to solitaire with pyramid solitaire being one of the more entertaining ones. People have usually associated Card games as being multi-player. But, anyone who has ever played a deck of solitaire knows the thrill and enjoyment that single-player card games can achieve. The solitaire we know today has a deep and rooting history.

The History of Solitaire

Solitaire is known by many names and has its roots firmly placed in the 18th century. However, it is quite possible that it might have been in play much before that. Generally referred to as Patience by the British, solitaire was not always a solitary game. Research has found that earlier it used to be played by multiple people each having their own deck of cards. The person who stacked his cards quickest was the winner.

Single player versions most definitely were inspired by practicing for these competitions and were later picked up as an intriguing and compelling habit. It was by the 19th century that books of rules started appearing in the English society. During this time Solitaire became very popular in both French as well as English society with Prince Albert taking a definite interest.

However, it gained momentum and became addictive only in the 80s after the advent of computers made it possible to shuffle and place them at the click of a mouse button. Today there are more than 1000 mini-variants of Solitaire card games with Pyramid Solitaire being among the top.

The Different Types of Solitaire

This is a very popular form of solitaire with each hand taking only a couple of minutes to complete. A pyramid is made of 28 cards arranged in 7 rows with the top row having 1 card blocked by 2 in the second row and so on. The objective is to remove all cards from the pyramid with the help of a stockpile. It is designed to entertain for hours on end. Other names are Pile of 28 and Solitaire 13.

This is the most popular form of Solitaire played and is available with Microsoft OS as well. 7 columns of cards are formed with the last card facing up and rest in a deck pile. The objective is to make foundation stack as per 4 suits starting from Ace and on to King. This is also referred to as Demon Patience and Fascination.

Many times Canfield is clubbed with Klondike solitaire. The real Canfield Solitaire card games involve 13 cards in a reserve pile. 4 cards of the same value are arranged as foundation piles, and four other cards are arranged below theses to form the start of the tableau.  Remaining 31 cards are placed as a draw pile. The objective of Canfield Solitaire is same as any other solitaire game; to move all 52 playing cards to the foundation stacks.

This game has no reference to the actual golf apart from the fact – lower the score better it is. Card layout includes 35 cards arranged face up with the remaining 17 cards forming a draw pile. The goal is to remove all cards to the discard pile; however, a card joining the discard pile can only be a point lower or higher than the previously placed card. This card game can provide guaranteed fun time for hours.

If you have time on your hands and want a challenging tactical game, then accordion solitaire is for you. The name comes from the layout of cards. There are no deal piles or stockpiles in this game. You have to spread the entire 52-card deck on the table. To save space, rows of three are made, and the cards are spread in a wide semicircle. The cards need to be dealt into their foundation piles as per rules of the game.

How to Play Pyramid Solitaire

Pyramid Solitaire is played with a complete deck of 52 cards that need to be well shuffled.

A pyramid of 28 cards is built with 7 overlapping rows in total. Each card in the top 6 rows is blocked by two cards below it, and these cards need to be dealt with before seeking the top card. The bottom 7th row is available to play immediately. The remaining cards are kept to the right in the stockpile with one card face up. In some variations, there can be 6 rows in play as well with a reserved row that has 6 available cards. Mini variations are ever present with all card games.

The objective of Pyramid Solitaire is simple and is as expected by any solitaire card game. You need to remove all cards in the deck to either the discard pile or waste pile. In other words, you need to make sure that there is not a single card remaining in the pyramid as well as the stockpile. The pyramid needs to be demolished with pairs of cards that total 13 removed to the left in a ‘discard pile.’ Whenever any pair of cards totals 13, it can be discarded to the discard pile.

It is simple yet intriguing to play this game. There is a reason why British called solitaire ‘patience.’ The best way to start this game is removing any available card that is a King as it has the value of 13 in a standard deck.

The rules of this game are very simple and straight-forward. A card is available to play from the pyramid only when both cards blocking it are removed. For example, if you have a play where a Queen in the sixth row is blocked by just one Ace in the seventh row, then you cannot remove them. The Ace cannot be removed until it is matched with another card and the Queen is not available till the Ace is removed.

The game is over when the top card of the pyramid is removed to the left into the discard pile and stockpile is over. If not, then scoring is based on the number of cards left in the pyramid. It is obvious that to win the game; the score should be zero.

There can be many variations of ways to play to make it easier and also more difficult.

Continuing with our Ace and Queen example from above, you can remove both the cards in this variation.

Pyramid Solitaire is has become a timeless niche that has provided hours of pleasure for card players of all ages. If you are searching for a game that can be completed within minutes and involves mild strategy, then Pyramid Solitaire is the game for you.