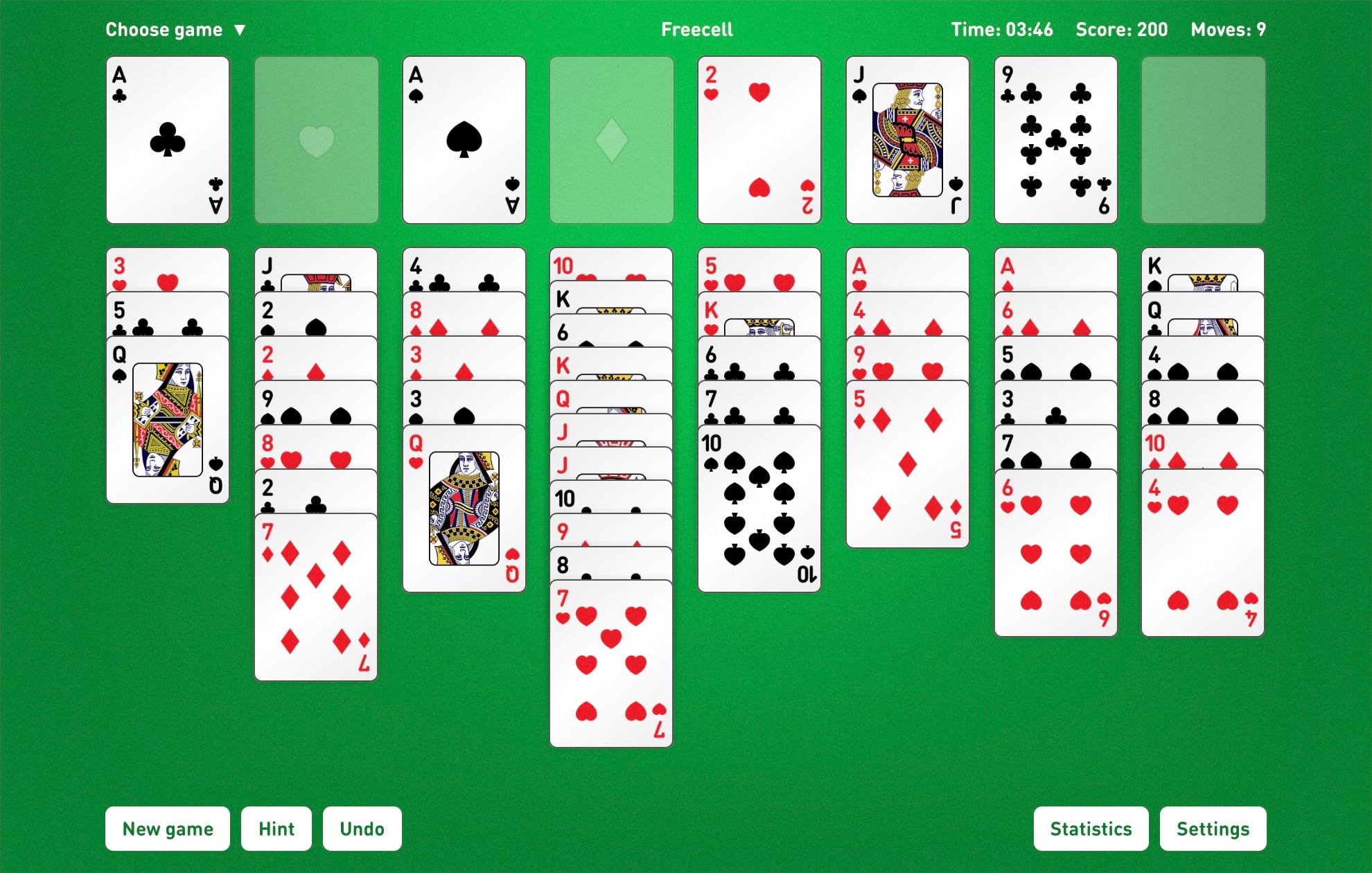 Scorpion Solitaire, like all solitaire games, is a single player card game, and it is a variant on Spider Solitaire, in which the goal is to make stacks of the same suit of cards.

It is simpler because the player uses only one standard deck of 52 cards (there is a version of spider solitaire with two full decks of cards).

But, it is also limiting because each card can only make one move onto the card in both its suit, but also the next in its sequence (i.e., the 10 of clubs can only be placed on the jack of clubs). We will get more into the rules later.

Most people have played Solitaire (some have even played Spider Solitaire), but this is the most extreme version, made to challenge the player. The rules are simple enough, but you’ll see why it is actually more difficult as we continue.

People have always loved Solitaire because it is a fairly quick and easy game, but also it is an immensely entertaining way to spend time.

You don’t even need other people, just a single deck of cards. There are many variations with different goals, such as regular Solitaire where you alternate red and black until you form piles beginning with an ace and working up to the king until all the suits are complete.

Spider Solitaire has a few versions based on how many suits you want to play with, but you’re not limited on which suit you place your card.

That’s what makes Scorpion Solitaire interesting. There are only specific moves you can make because the cards can only be placed on the same suit and one rank higher.

I will provide a few tips to make winning a little easier. However, in playing, I have noticed that there is an element of luck. I had a couple deadlocked pairs of cards without me having done anything to cause it.

It is quick and easy in that there are not a lot of rules or equipment, but it takes patience. It’s not a mindless game. You need to think about strategy, so you don’t end up in a deadlock.

Also, you only have three extra cards to use if there is a deadlock. The challenge of this game is the limits it places on you.

A Brief History of Scorpion Solitaire

Scorpion Solitaire gets its name from the way the cards are laid out in the shape of a scorpion. The seven columns make up the body while the three cards pulled out in reserve serve as the tail.

The tail is meant to strike down at any point in the game when there are no moves left just as the tail of a scorpion strikes down prey.

The four spaces at the top for each completed suit of cards represent the head of the scorpion.

The need for Scorpion Solitaire developed from the desire for a harder challenge. Once games become too easy, the player loses interest.

It is fairly easy to win most games of regular solitaire. Spider Solitaire is harder, but depending how many suits you use, it’s not that difficult to learn and figure out.

The limits placed on Scorpion Solitaire make it interesting because there are so few moves that can push the game forward. Even though the game might not deadlock, there may not be a next logical move.

Because it is a single-player game, the idea is to challenge yourself. You’re not beating another person, you’re achieving a goal for yourself, and that can be rewarding.

As stated above, the layout of Scorpion Solitaire represents a scorpion. There are 49 cards in the body, laid out in seven columns, each with seven cards.

The tail of the scorpion has the remaining three cards, face down and played when the player is out of moves, so they can hopefully continue the game.

As you play, any of the cards on the tableau can move; however, they can only go on a card that is one rank higher and also the same suit.

If you move a card in the middle of a sequence, the whole sequence of cards must move with it. Only kings can be played in an empty column along with any cards in sequence with the king.

To win the game, you must make four complete suits of cards (spades, clubs, hearts, diamonds) in order from king to ace.

When you are out of moves and need to use the tail of the scorpion, one card goes in each of the first three columns.

The game itself is easy. However, it requires patience. It also requires you to think about where you’re placing a card. That’s what makes the game worth playing.

If it were as easy as regular Solitaire, there wouldn’t be a reason to play it. It would bore us because it wouldn’t be new or a challenge.

Solitaire and its many variations have always been a great pastime for people who need to kill time or who don’t have an option of something better to do (like when the power goes out, or everyone else is busy).

It’s great because it is single-player, so you don’t have to invite all your friends.

Scorpion Solitaire is one version of solitaire that is special because it requires so much thought and patience.

There are not a lot of options for moving the cards, so it’s better to err on the side of caution before making a move.

It reminds me a lot of chess or puzzle games like Sudoku because as a player you know what the goal is and how you play the game is how you reach the goal. You need a strategy.

Before today, I had never played Scorpion Solitaire. I had played regular solitaire and Spider Solitaire, and this version proved to be a lot more limiting, but in an interesting and exciting way.

I had a lot of fun thinking about my potential moves and trying to figure out how I might win. It’s a great way to keep the mind active because it is a strategy-based game.

I still have not won a game yet, but I intend to keep trying. Since playing, I want to win a game. It’s an achievement for me to earn and a challenge for myself.

If you’ve never tried Scorpion Solitaire, you should! The reasons I listed above are endless: it is a good way to challenge yourself, it’s fun, and you don’t need friends or anything more than a deck of cards (or a website).

The learning curve is simple; I learned it in less than 10 minutes.

There’s really not much else to say other than play Scorpion Solitaire because you don’t know yet how much you might enjoy it. Have fun playing!